Yeah, yeah, I know jazz band covers are one of those things that high school band nerds get all obsessed with, but whatever! Riot Jazz Brass Band’s cover of this Drum & Bass track is a real earworm (I’m calling this Brass & Bass).

I’ve also become a little obsessed with Brass Bands in general. Honourable mention to Too Many Zooz for starting me down this path.

Two cycling related posts in a row? You bet!
I started using Strava when I bought a decent bike in August, I’ve always liked the idea of tracking my day-to-day. I hope that one day this data could be used in the same way that handwritten diaries of the past were used.

The way that Strava adds a gamification level on top of fitness tracking is really working well for me. For example, I signed up for “The Escape Plan” challenge, which gives you a little digital badge for exercising at least 5 times every week for the Month of September. It’s essentially a video game achievement system IRL. I’ve been able to keep it up for 2 week and all the extra exercise is actually having a positive effect on my mental health. It’s incredible.

Strava also tracks your personal best times, broken up by segments. I know that I’m never going to be as fast as some guy who bikes 100km per day on his $5000 bike. But I can always improve my time. So today on my way home from work I tried hard to beat my own records and wouldn’t you know it, I gained 7 achievements! Feels good.

One other kinda “web 2.0” feature worth mentioning is “flybys.” Strava will show you other Strava users you’ve passed on your ride (or run). Kinda neat. Kinda creepy. It’s opt-out.

FireFox release their “VPN” (it’s actually a proxy, I don’t fully understand the difference) this week on testpilot.firefox.com. Ironically, it’s only downloable from the US, so I used a free tunnelbear account to download it. 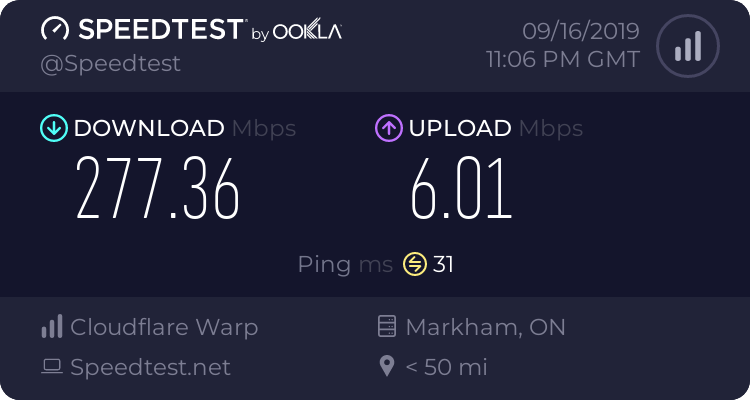 Speed test looks good, this is slightly lower than my ISP’s max but totally acceptable for web browsing.