I got a message from my ISP’s (Shaw) Bandwidth Team today. I wasn’t able to return the call, but I suspect they were calling to scold me about my bandwidth usage.

Bandwidth cap policies were a knee jerk reaction from ISPs ill-prepared for the era file-sharing on Napster and later voracious bittorrent usage. An era when someone using hundreds of gigabytes of bandwidth every month was likely a digital media hoarder, pirating more MP3s and MKVs than they could ever consume in a lifetime. An era of poor network management technologies, when a heavy movie pirate, could legitimately have a massively negative impact on other customer sharing their node.

I would never condone the hostile vilification of customers that these sorts of policies brought on. However, I am a reasonable person and I can understand where the ISPs were coming from. One the one hand they had the MPAA to deal with, on the other than they had technology and networks that were still maturing and not totally up to the task.

In 2016, it is a completely different landscape.

ISPs, hardware vendors and standards bodies have come a long way in improving network congestion. One of the reasons you don’t see buffering youtube videos is not because your ISP and copyright lawyers have convinced your neighbour to stop pirating with bittorrent. It’s because the the network has improved in general.

Even if your neighbour has stopped torrenting movies though, they’re probably consuming media online than ever. If he’s anything like me, he’s been using perfectly legit streaming services and the amount of bandwidth used by these streaming services is just as intensive as bittorrent. Netflix and friends are not doing anything magical to compress the video any more than the high quality rips you can find on the pirate bay.

Free-for-all (well, except the customer)

However, they have done something magical that makes these bit free for your ISP.

In 2014, Netflix revealed that they provide an “Open Connect Appliance” to ISPs. Free of charge.

Netflix’s OCA is a $20,000 server, that sits inside your ISP’s datacenter and stores a good chunk of Netflix’s library. They give it away for free because it is key factor in loading Netflix movies without having to wait for buffering. It stands to reason that Youtube, Crackle, Akami or any company looking to provide fast content has a similar set up (but they haven’t said as much).

Before today, I assumed that Netflix probably only had a few of these boxes in each ISP’s network. I assumed Shaw’s would be located in Calgary or wherever their HQ is.

Then I dug into it by using very rudimentary investigation tools. Every resource on the internet has a unique URL and Netflix’s URLs seem to have logical names, so it wasn’t really too hard to figure out.

This isn’t a website you can actually visit, it’s just the URL were Netflix videos are hosted. For me.

You see, before I even load the video, Netflix has figured out the closest physical location of the video file I’ve requested. When every second of load time counts, every kilometre of fibre is important. Hosting a file in Winnipeg instead of Calgary makes a difference.

I think it should be clear to most what’s going on in the URL, but if not. I’ll break it down further. URL are ordered from right to left.

.net = network
.nflxvideo = their stock symbol + the word ‘video’
.isp = Internet Service Provider, indicating that every URL above sub-domain are for an individual ISP
.shaw = my ISP
.ywg002 = Airport Code for Winnipeg + 002, probably the #2 OAC in Winnipeg
ipv4_1-lagg0-c005.1. = It’s hard to guess what exactly this means. It almost looks like it has something to do with my connection type.

In other words, when you request a video from Netflix your request does not get routed through expensive backbone connections to some far away server in Dallas or San Francisco, it does not even leave the city! It might only good a few metres down the street.

To further confirm this, I ran a traceroute, a command that follows a packet through the network. 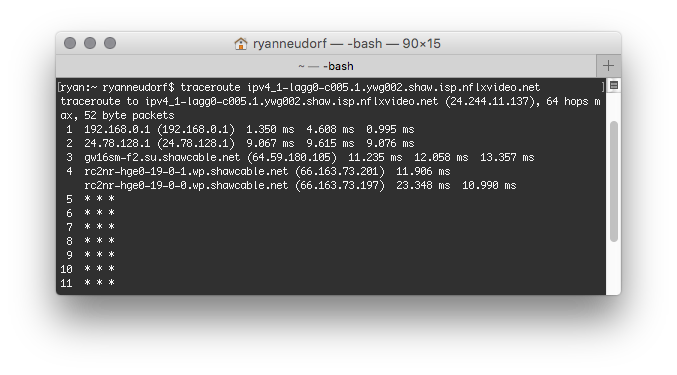 I’m uncertain where those IP addresses are physically, they don’t have convenient hostnames that give it away. Maybe a Shaw employee could leave the details in the comments. But it’s clear that the packets absolutely stay inside Shaw’s network.

In conclusion, when packets do not leave your ISPs network, your ISP does not have to pay a third-party to transmit and receive those packets to and from their destination. Whether you are watching 1 hour of Netflix per week, or 100 hours, it doesn’t cost your ISP any more money.

If this is true for other content providers and content distribution system (and it probably is), then we actually have a network architecture where the heaviest data is the least expensive, if not completely free.

Update for clarity: The IP addresses that the Shaw related hostnames resolve to are owned by Shaw themselves (as verified by ARIN).